For over a half century, Cat Pumps has revolutionized
the high-pressure pumping industry.

Prior to opening our doors in 1968, William L. Bruggeman worked as a project engineer for a small pressure washer manufacturer in St. Paul, Minnesota. His task was to design a more reliable pump for the pressure washing industry, which resulted in our patented “Uniflow” piston pump. After finishing the design, he set out to source a manufacturer and months later, received the first prototype which would be known as the Model A (4 gpm, 700 psi). After presenting the prototype to his employer, he was told that the design was far too expensive and the project was terminated. Because of his strong belief in the superior reliability of his product and the overall value, this could provide in the marketplace, he decided he would pursue his design on his own and Cat Pumps was born. Soon after introducing the products into the marketplace, Cat Pumps earned the reputation as “the pumps with nine lives” because of the superior life compared to other models available in the market.

With the company officially off the ground, Bruggeman began traveling around the country with his new pump design. He soon identified a large opportunity in the car wash industry, which only had pumps available that delivered a very short life, increasing operating costs and extensive downtime. Our first significant order came from an OEM who said he would place an order if the pump would last 30 days without breaking down. The pump not only made the 30 day period but it exceeded the life of the previous pump being used by over 10 times without any service required. Soon after, “the pumps with nine lives” began to show their true value in the marketplace.

In the following years, it was our dedication to quality that began to earn us the wide-spread word of mouth recognition, which gave us the opportunity to expand far beyond the carwash and pressure wash industries. Our product line quickly grew to meet the demands of various industrial markets. Today, Cat Pumps has grown into the market leader, providing the highest quality pumping solutions to thousands of applications around the globe. Below is a brief snapshot of our journey. 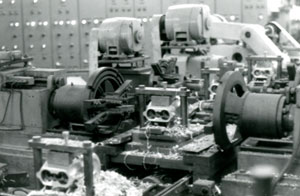 Cat Pumps officially opened its doors for business with the introduction of the "A" Series Model 400 Cat Pump (4.0 GPM, 700 PSI). Originally designed for the pressure wash market, this pump revolutionized both the car wash and pressure wash industries, providing 10 times the life of previous pumps.

1975
The Catmobile Hits the Road 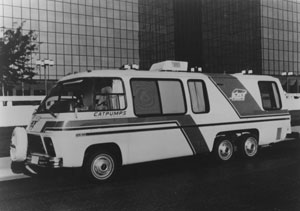 In an effort to expand sales throughout the United States, in 1975 Cat Pumps introduced the “Catmobile,” the first high-pressure pump demonstration vehicle. Each Catmobile was equipped to facilitate live Cat Pump demonstrations, product and application training, and system accessories education.

1978
The Plunger Pump Take the Pumping Market by Storm

Cat Pumps introduced the "double seal" concept Plunger Pump, with the Lo-Pressure Seal that provided lubrication for the ceramic plunger on the backside of the Hi-Pressure seal. This unique new seal design and the exclusive, specially-formulated seal material offered exceptional life and further expanded pressure capabilities.

To meet the growing demand for Cat Pumps, a new global headquarters was constructed in Minneapolis, Minnesota. Originally consisting of 106,000 sq. ft., the building has been expanded to 149,000 sq. ft. and still serves as Cat Pumps world headquarters.

With the growing demand for fast turn-around on reliable pumping systems, Cat Pumps introduced Power Units in 1992. These custom designed, 10-75 hp skid mounted packages were customized to customer specifications and came complete with pumps, bases, drives and a variety of necessary control accessories. 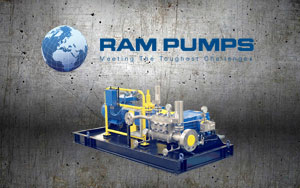 Expanding on an in-house print shop, Cat Pumps made additional investment in a complete creative service team, services including print media, photography, video, and animation allowing for better and faster support materials to our customers.

Today, Cat Pumps are found in thousands of applications around the globe. Our product line has grown to include over 1,000 pump models, reaching flow capabilities to 240 gpm and pressure capabilities to 10,000 psi